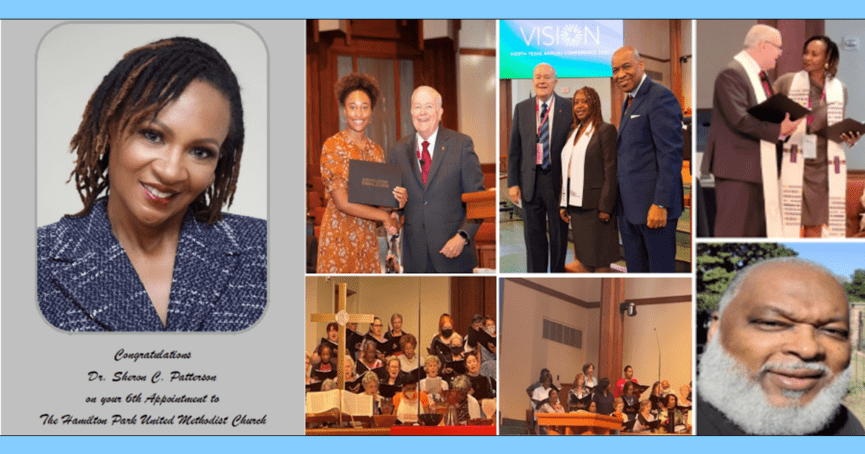 As United Methodists from around North Texas gathered at First UMC Richardson on June 3-
6, our church members and pastor were featured.

On Sunday, June 5 Minister Terrence Jennings and our choir were invited to join a mass
choir that sang at the Opening Service. Also, Rev. Jennings played and conducted one of
the selections.

On Monday, June 6, Dr. Patterson and Bishop McKee led the litany of the Service for Baptism Renewal.
Later that day, Jillian Jackson received the “Harry S. Denman Award for Evangelism.”

On Tuesday, June 7, Deaconess Dee Dee Spivey was Commissioned by the North Texas
Annual Conference for service. Dr. Sheron C. Patterson was appointed to Hamilton Park
UMC for her 6th year and Minister Dwight Harry has been assigned to Hamilton Park UMC
as Lay Minister for the 7th year.

Helen Bell commented, “It was a joyous occasion to sing with the blended choirs at Annual Conference. We
learned new songs in Swahili and Spanish. I look forward to doing it again.”

At the Opening Service of Sunday, Brother Marsh was invited by Bishop Michael McKee to serve as a liturgist. Brother Marsh is also a member of the North Texas Annual Conference Episcopacy Committee. This select group addresses all the needs and concerns of our episcopal leader. On Monday, Brother Marsh joined the Episcopal Committee on stage as they presented Bishop McKee with retirement gifts.