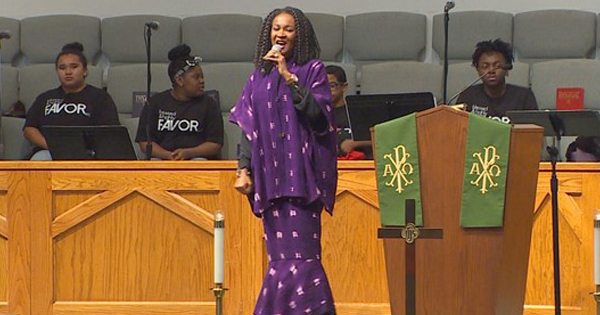 Speaking Out at The Park

This article was originally published on January 14, 2018, on WFAA’s website.
DALLAS – The firestorm over President Trump’s alleged vulgar comments about immigration continues to play out this holiday weekend.

Some international and local church leaders spent Sunday speaking out against the President’s tone and words.

As the praise and worship team belted out songs from the choir loft at Hamilton Park United Methodist Church in Dallas, members in the sanctuary greeted one another with smiles and hugs.

Worshippers at this church were spending Sunday remembering the life and work of Dr. Martin Luther King Jr.

This holiday weekend comes on the heels of the alleged controversial remarks from President Trump about immigrants from Haiti and African countries.

“We are going to stand up and say we rebuke this type of language,” Patterson preached.

President Trump has gone online to deny making the divisive statements, despite lawmakers who were in attendance in the meetings saying he did speak the harsh words.

The fallout and impact was discussed openly during Sunday’s service.

During an altar call, more than a dozen church members who are immigrants from African countries stood before the congregation, as members of the church lifted them in prayer.

“You all are persons of sacred worth,” Patterson told the group.

“I, as President,” want people into our Country who are going to help us become strong and great again, people coming in through a system based on MERIT. No more Lotteries” #AMERICA FIRST”

Julius Irozuru immigrated to the U.S. from Nigeria. He was among the church members speaking out against the President’s alleged comments.

“It lacks humility,” Irozuru said. “It’s very shameful that a leader of a country like the USA, that all looks up to, would say that.”

In the spirit of unity, church members said they will not be silent.

This article was originally published on January 12, 2018, by Bishop McKee on the North Texas Conference website.
This week, it was reported that President Trump referred to several nations with language that is unbecoming the leader of our country. I am aware that many of our churches in North Texas have developed deep relationships through their mission work with people from several of the countries the President denigrated with his remarks. Just last summer, I traveled to Honduras and Guatemala to be in conversation with Methodists there who are working each day to strengthen their countries. These men and women of faith inspired me by their resilience, commitment, faith and exemplary character.

Now is the time when we can no longer be silent in the face of racist rhetoric coming from our political leaders. Leaders of both political parties can no longer remain silent when bigoted words are said in their presence. The sins of omission are as dangerous as the sins of commission. …

This article was originally published on January 16, 2018, by Sam Hodges on the UMC.org website.
Christy Obiageri Ogbuehi, a member of Hamilton Park United Methodist Church here, has a plea for President Trump regarding Africa and specifically her native country of Nigeria.

Obguehi is one of many United Methodists in the U.S. and beyond who criticized Trump’s reported use of a vulgarity and the overall tone and substance of his remarks about African countries and Haiti during a private a White House meeting last week with senators trying to reach a bipartisan immigration deal.