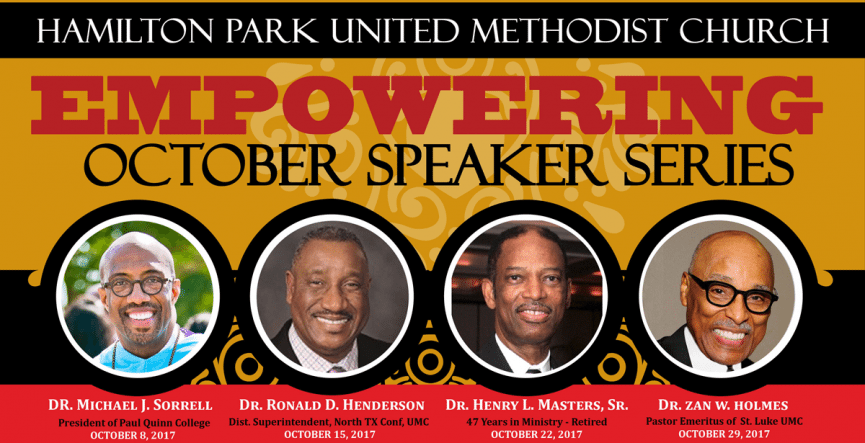 In celebration of Hamilton Park UMC’s 60th anniversary, to be marked on October 21, 2017, we are excited to welcome distinguished guest speakers throughout the month of October during the 10:00 a.m. worship service.

Please join us on these Sundays for wisdom and inspiration as we celebrate 60 years of ministering and service to souls and to our community. 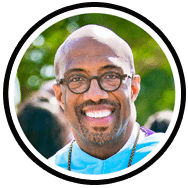 Michael J. Sorrell is the 34th President of Paul Quinn College. Under his leadership, Paul Quinn has gone from an institution on the verge of collapse to one that is now nationally renowned for its innovative approach to higher education. Among the College’s accomplishments during President Sorrell’s 10-year tenure are the following: transforming the football field into the WE over Me Farm in order to battle the food desert conditions of the community surrounding the campus; becoming the first federally-recognized urban Work College; implementing a business casual dress code; winning the HBCU of the Year, and rewriting all of the institution’s fundraising records.

Michael received his J.D. and M.A. in Public Policy from Duke University and his Ed.D. from the University of Pennsylvania. While in law school, he was one of the founding members of the Journal of Gender Law & Policy and served as the Vice President of the Duke Bar Association. He is a product of the small, liberal arts college tradition, having graduated from Oberlin College with a B.A. in Government. While at Oberlin, he served as Secretary-Treasurer of his senior class, was a two-time captain of the men’s varsity basketball team, and graduated as the school’s fifth all-time leading scorer.

While President Sorrell has won many awards throughout his career, the honor that has meant the most to him was being selected as the “Father of the Year” for the City of Dallas in 2016 for his relationship with his wife Natalie and their two wonderful children, Michael Augustus and Sage Louise-Sinclair. 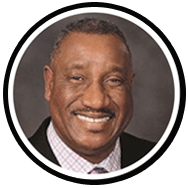 Dr. Henderson received his Bachelor of Science from Dallas Baptist University, a Master of Divinity from Gammon Theological Seminary in Atlanta, Georgia, and a Doctor of Ministry from Perkins School of Theology at Southern Methodist University.

He is married and has four children and two grandchildren. 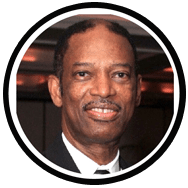 Dr. Masters is a native of Waco, Texas. He is a graduate of A.J. Moore High School, Paul Quinn College (B.A.), Perkins School of Theology, Southern Methodist University (Master of Theology and Doctor of Ministry), Huston-Tillotson University (Doctor of Divinity). His first ministerial appointment began in the Central Texas Conference of the United Methodist Church with the Metropolitan Board of Mission working with an ecumenical staff of Urban Community Organizers. He has served churches in Texas (Fort Worth, and Dallas), Los Angeles and one term as District Superintendent. Additionally Dr. Masters has also served as Adjunct faculty at Texas Christian University (TCU) and Perkins School of Theology, Southern Methodist University (SMU).

In 2012, Dr. Masters returned from an eleven year pastorate at Holman UMC (the largest UMC in Los Angeles) to assume senior pastor duties at St. Luke “Community” UMC in Dallas. In June 2014, Dr. Masters retired after forty seven (47) years of pastoral ministry. He is married to Rev. S. Dianna Masters (Pastor, Warren UMC-Dallas). They have three grown children and four grandchildren. Active at the local, national and international level Dr. Masters serves on several boards and agencies including Africa University Development Board which oversees the work of Africa University in Zimbabwe. Dr. Masters in an avid reader and writer having authored two books, Simon of Cyrene: The Crossbearer of Jesus Who Was the Only African Eyewitness to the Crucifixion, (Inkwater Press 2004) and Makin’ Room in the Inn, Christmas Hospitality through an African American Experience (Abingdon 2010) co-authored with his wife Rev. S. Dianna Masters. He was also publisher of By Faith Magazine,a publication that serves the 2,500 Black congregations in the United Methodist Church as well as Black Methodist for Church Renewal (BMCR) and its network of local chapters and partner organizations.

A passion of Dr. Masters is working to revitalize churches in the central city and developing resources for Black churches and communities. His current efforts are focused on writing, consulting, traveling, assisting his wife of forty years, going to visit grandkids and publishing a new publication. 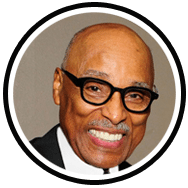 Zan Wesley Holmes, Jr. is Pastor Emeritus of the 6,000 member St. Luke “Community” United Methodist Church in Dallas, Texas, where he served for 28 years. He was Adjunct Professor of Preaching at Perkins School of Theology at Southern Methodist University for 24 years. Known as much for his community activism as his preaching and teaching, Dr. Holmes was elected to the Texas House of Representatives from 1968-1972, while he also served as United Methodist District Superintendent. He is the author of Reaching for Renewal (1991), Encountering Jesus (1992), and When Trouble Comes (1996). Dr. Holmes has also written chapters in Our Time Under God Is Now (1993) and Power in the Pulpit: How America’s Most Effective Black Preachers Prepare Their Sermons (2002).

He is widely known for his role as narrator and host of the well known Disciple I Bible Study video series produced by Abingdon Press.

In 1991, Governor Ann Richards appointed him to be the first African American to serve on the Board of Regents of the University of Texas System, a position he held from 1991 to 1997. In 1971, Judge William Taylor of the United States Court for the Northern District of Texas appointed him to serve as chairperson of the Tri-Ethnic Committee, which oversaw the implementation of public school desegregation in the Dallas Independent School District. In 2001, the National Voting Rights Museum and Institute in Selma, Alabama recognized him as one one of the civil rights movement’s “Invisible Giants.”

In 2012, the Dallas Independent School District honored him at the dedication ceremonies for the new Zan Wesley Holmes Jr. Middle School.

Holmes is the founding president of the Dallas African American Pastors Coalition. Under his leadership the Coalition was the Primary developer of Unity Estates, which is a community of 300 affordable homes, and is a national model for a major inter-denominational economic initiative.

Join us for “Celebrating Our Heritage” 60th Anniversary Event

You are invited to help The Park celebrate our 60th anniversary on Saturday, October 21, 2017, at Hilton Dallas Lincoln Centre! It will be an exciting evening of praise, worship, dinner, dancing, and more.
Get Details